Many projects follow the same pattern for software testing. These projects test the entire system by running manual test cases through the user interface. When the number of manual test cases grow beyond the capacity of the current staff they introduce automation tools to execute the manual test cases. This testing strategy leads to discussions about data management, test maintenance cost and ever increasing execution times.

While there are ways to improve the exist testing process, ultimately I think the strategy is wrong. More specifically the test boundaries are wrong. We can't effectively test a system using end-to-end tests exclusively. This is an example of an alternative testing strategy.

Imagine we have a system with three Modules (A, B, C).

If we test the entire system across all the modules, we need 1000 tests to cover all the paths through the system.

We can drastically reduce the testing effort by splitting our test boundaries. 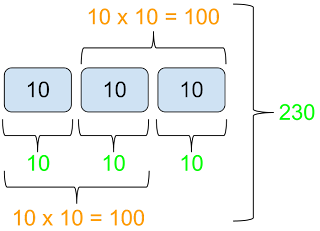 The most powerful benefit of smaller test boundaries is the ability to quickly localize failures. If there is a single path in Module B that has a defect and we have a full system boundary we will have 100 failing test cases. This large number of failing tests makes it difficult to track down a single defect. 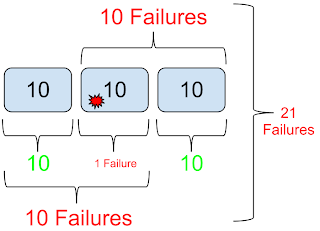 I realize this is a simple example, but I hope it illustrates the effects and impact of using smaller testing boundaries.
Posted by Tim Gifford at 11:36 PM 1 comment: